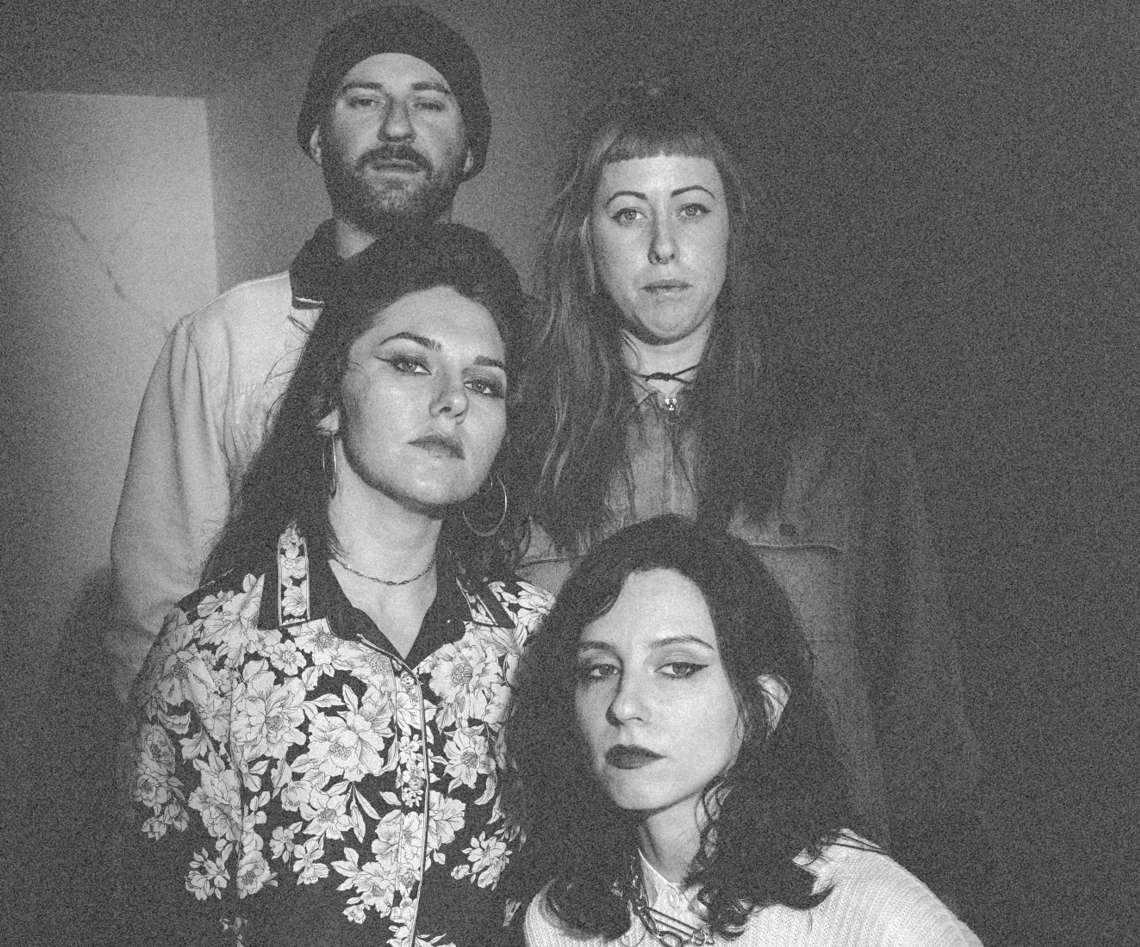 It’s in the title track, a riff-heavy dispatch from a near future when billionaires flee the dying Earth, only to find their own comeuppance. It’s in the tuneful, ’70s punk of opener Car and its dismissal of “one nation under fraud.” It’s in the jittery “Find A Way,” which demands “Burn all the money, all the flags, all this stupid pride.” It’s in the entreaties to resist of “Tollbooth:” “the world needs you and you and you.”

“It wasn’t intentional to write a politically charged record,” says bassist Amy Allen, who constitutes FEELS with Laena Geronimo (guitar/vocals), Shannon Lay (guitar/vocals), and Michael Perry Rudes (drums). “But the way the world is functioning right now made it impossible to write about anything else. We all need to figure it out; we’re running out of time. The golden age is over.”

Maybe FEELS did not start their second album with a conceptual agenda, but they definitely intended to speak out: “If you have any kind of platform, you should use it for good,” Lay states. Geronimo continues, “If our wildest dreams came true, the album would sound exciting to people while also inspiring awareness and action against hate, prejudice, greed, the destruction of our environment…apathy's not cool and toppling oppression could be fun if we do it together!"

With that steadfast proportion of heavy and light, Post Earth never completely wallows in despair: look for The Simpsons references—courtesy of superfan Lay—in goofy rave-up “Deconstructed.” The atmospheric jam “Sour” finds Geronimo defiantly proclaiming “This land is our land” to the people in power who exploit division. The understated melodies of “W.F.L. (Work For Love)” sing of dirt under fingernails “to remind us why we do what we do.”

FEELS do what they do thanks to a bond that stretches back to adolescence. Geronimo, Allen, and Rudes have known each other since high school, when the Rudes’ garage served as the hangout and nexus for their musical projects. Rudes and Lay played in Geronimo’s solo project, Raw Geronimo, for years before it morphed into FEELS with the addition of Allen. Their shared history makes for a rare chemistry among collaborators.

After recording their 2016 eponymous debut – which earned the band press attention from outlets including The FADER, SPIN and The Los Angeles Times -- with Ty Segall in one marathon daylong session, FEELS decamped to Northern California in August 2017 for a comparatively luxurious eight days with Tim Green. The former guitarist of punk iconoclasts Nation of Ulysses, Green has worked with Sleater-Kinney, Bikini Kill, Joanna Newsom and Jawbreaker among others. “His studio was an ideal experience to be able to escape day-to-day tasks, lock ourselves away, and focus,” ruminates Rudes.

“I think the first album was very much like how we were live,” Lay says. “It was just this barrage of noise and energy, and with this one we were able to give it some breath and take our time—and also just think about what we were trying to say with this record and how we didn’t necessarily want to constantly scream it at you.”

On Post Earth, FEELS strike this perfect balance with a mix of angular, interweaving guitars, lush vocal harmonies, heavy bass and pummeling drums — at times hearty and loud, and at others stunningly harmonic and calm. “We feel comfortable not having to power through everything now,” Geronimo adds. “And for the more subtle things to be heard versus glossed over with noise. Not that noise is a bad thing, but we’re doing all of these weird, interesting things—maybe we should hear them.”

For Geronimo -- the daughter of legendary Devo drummer Alan Myers who grew up playing in a wide variety of projects with (and without) him – interesting is ingrained. The interlocking components of Anyways reveal her classical training: “I wrote it to be these really specific parts that had to layer over each other exactly, which is a real sheet-music kind of bullshit thing,” she says, laughing. “Luckily everyone was down to humor me.”

But that’s the modis operandi of FEELS: “There’s no point in being like, ‘That’s not going to work,’” Geronimo says. “Just try it—who knows?”

“Who knows?” is also the central question of Post Earth. “It’s more of a questioning than a telling kind of album,” Geronimo says. “I guess that’s the bottom line. It’s a questioning: What’s gonna happen?”

There’s no easy answer to that one. But if the good old days are over, Post Earth shows FEELS’ golden age is just beginning.