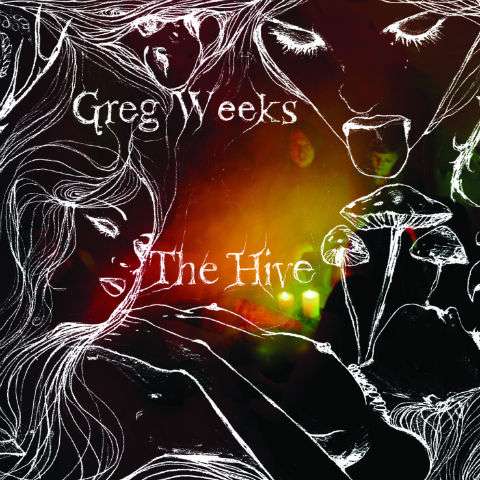 The Hive is the solo record by Espers founding member Greg Weeks.

GREG WEEKS ON ‘THE HIVE’: Frustrated with new methods and mindset in recording technology I threw up my hands and built my own analog recording studio. My last album, Blood Is Trouble (as well as the first Espers record) was recorded on a 1⁄2" 8 track machine. Eventually I was able to upgrade to an MCI 2" machine and professional recording console which have allowed for better sound quality and greater experimentation. Having a home studio has allowed me to record and produce albums at a comfortable pace consistent with my own levels of inspiration.

Key to the album's sound was the acquisition of a vintage Mellotron keyboard. The Mellotron is doubtless my spirit animal in instrument form and is certainly one of the main inspirations behind The Hive. No other instrument conveys the characteristics of hive insects as well as this legendarily warbley tape based sampler. It's an instrument used by most all of my heroes: Robert Wyatt, King Crimson, Led Zeppelin, The Pretty Things, Krokodil, Canadian band Harmonium and all nine trillion Italian prog bands that I love!

The Hive is primarily a response to the atmosphere of apocalypse that permeates the lives of those who are open and receptive to their environment (not to mention the general global condition). That's not to say the album's entirely about misery and despair. Quite the contrary; I have a good amount of fun trolling through the backwaters of my own dank grey matter (often darkly comical), and each of these songs have multiple meanings, so glean from them what you will.

The Hive also contains a cover of Madonna's "Borderline", my first recorded cover since tackling Cat Power's "King Rides By" on Fire In The Arms Of The Sun. This was meant to be a future Espers release but I got antsy waiting for the next covers record to come about so here it is (after three years of simmering on my mental back burner).

Track list: 1 You Won't Be The Same Ever Again
2 The Lamb's Path
3 Lay Low
4 Borderline
5 Burn The Margins
6 The Hive
7 Funhouse
8 Not Meant For Light
9 The Wait
10 Donovan
11 Division